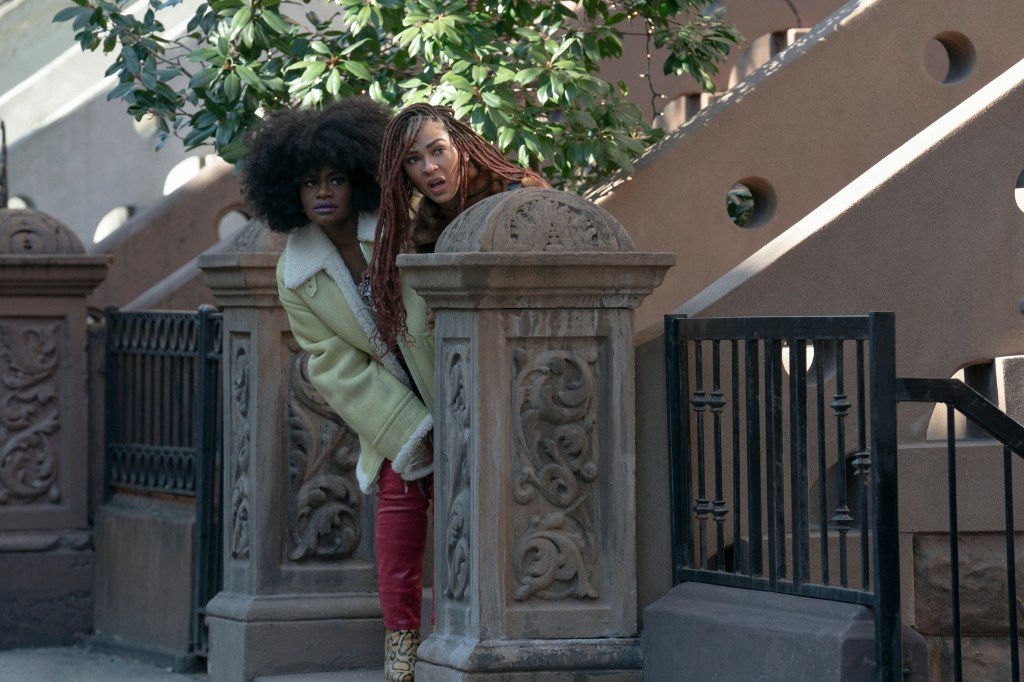 As anthropology professor Camille (Meagan Good) puts it, the beginning of winter signals the beginning of a season full of giant sweaters, seasonal lattes, and the irrepressible urge to burrow at home in as cozy a fashion as possible. While Camille brings this all up to explain "cuffing season" (i.e. the colder months inspiring single people to search for a partner to burrow with), I bring it up to explain why spending time with "Harlem" feels about right at this time of year, when fun and cozy programming reigns supreme. From creator Tracy Oliver ("Girls Trip"), the new Amazon Prime Video series runs 10 episodes long, but flies by in no time at all.

The season follows Camille and her group of friends, an "unbreakable sisterhood" that includes diehard romantic Quinn (Grace Byers), up-and-coming tech maven Tye (Jerrie Johnson), and ebullient singer Angie (Shoniqua Shandai). As another show about four thirtysomething friends living, laughing, loving in one of New York City's most rapidly gentrifying neighborhoods, "Harlem" inevitably has some parallels to Starz's "Run the World." Still, "Harlem" has more of a bubblegum snap to it, and a different enough slate of actors and storylines to keep the two series distinct enough from each other. After all, plenty of shows have featured a white group of friends trying to make it in the big city; there's no reason why there shouldn't be room for two concurrent shows about Black women doing the same.

"Harlem," for one, distinguishes itself by featuring an intriguing main lesbian character in Tye, who quickly becomes one of the show's most compelling thanks to Johnson's charismatic performance. Tye's smart and confident in her abilities, but has a big enough chip on her shoulder to keep her from completely owning her every instinct. And while everyone in "Harlem" is at a crossroads of sorts, as the creator of a dating app exclusively for queer people of color, Tye's on the edge of the kind of success that could set her up for life. That Tye's apparently neglected to weave queer people of color into her own life outside of sex and romance is a strange and glaring aspect of her life that somehow never comes up -- but she's also far from the first gay character on TV to have an entirely straight group of friends, so it's not entirely a surprise, either.

Good, meanwhile, does the most she can with Camille, a character that's ostensibly the glue of the group but is by far the least distinct. Even as her voiceovers bookend every episode, Camille turning her anthropological lens on the rom-com exploits around her doesn't quite work. (The pilot's motif of having Camille aspire to be like a member of the matriarchal Mosuo clan, featuring a mute Asian woman poking into frame whenever she thinks about it, is a particularly weird and clunky device that does the rest of the episode no real favors.) Though Camille's storylines are most interesting when Good gets to act opposite Whoop Goldberg as Camille's discerning new boss, "Harlem" otherwise works best when following her friends, each of whom feels more sharply drawn.

As Quinn and Angie, Byers and Shandai bring out the most nuanced parts of their characters with ease. Byers, best known for playing slinky villain Anika on "Empire," draws on that moneyed character to play this new one, but also demonstrates a sharp sense of timing that keeps Quinn compelling. Shandai commands the screen every time she's on it, especially as Angie gets off Quinn's couch and into a hilariously cursed musical adaptation of "Get Out." (The "Sunken Place" and "Liberal Family" dance numbers and set design feel just real enough to be that much more uncomfortable; it's far too easy to imagine this production hitting Broadway any minute now...)

When together, the core four "Harlem" friends have a rapport that makes them easy to hang out with for the few hours the show takes to watch. Even when the script asks them to work in expository dialogue that sounds unnatural when spoken aloud, it otherwise leaves room for the actors to lean on each other's performances to bring out the best in all of them. As the year winds down and we start craving some smoother entertainment to while away the colder hours, the women of "Harlem" make for some fine company.