The Shrink Next Door Recap: Party Down 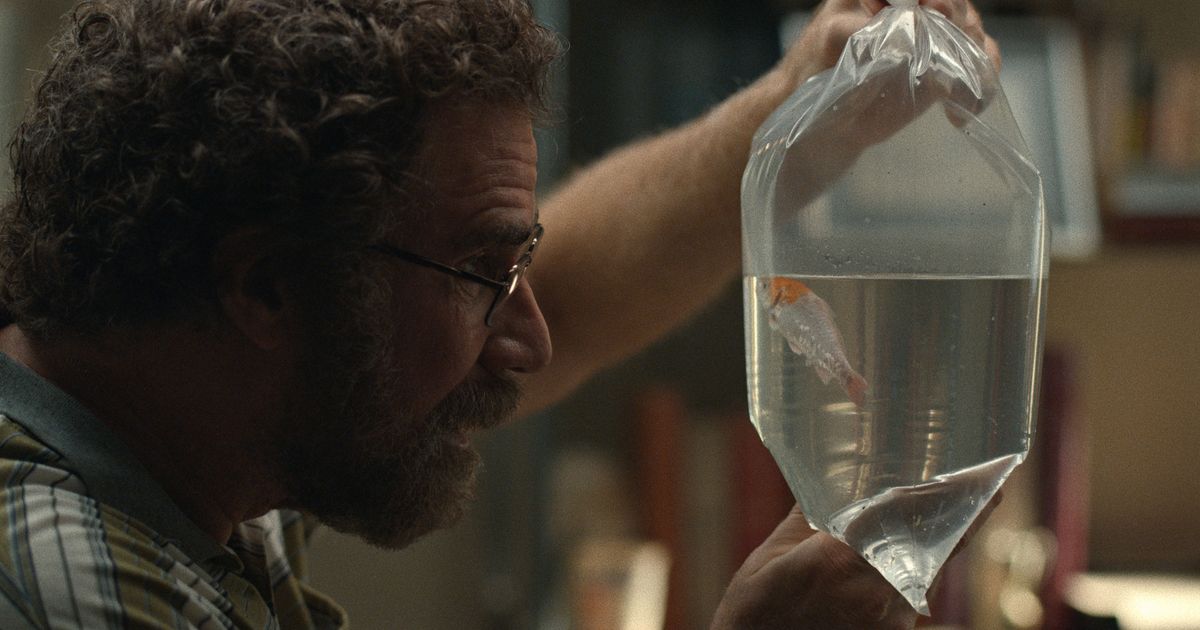 This week, The Shrink Next Door kicks into high gear by covering 16 years of Marty and Ike's relationship in a single episode. First, we pick up where we left off last week: with Ike and Marty planning a big housewarming bash to celebrate Ike's hostile takeover ... er, renovations they've made to the house.

Over the next decade and a half, Ike proceeds to throw lavish theme parties at the property every summer. Marty is relegated to grill-master duty, and it's worthy to note that he never plays along with the themed attire. In fact, he's wearing what appears to be the same exact long-sleeve, army-green henley at every single party.

Marty's half-hearted enthusiasm for the parties doesn't change, but the years tick by anyway.

Ike's enthusiastic voice-over at the top of the episode marks the exact day when the Hamptons home became party central: July 6, 1991. Ike promises his guests a wonderful time in a cheeky save-the-date. There will be food, drink, and oodles of games. The theme is "safari," and he encourages his guests to "dress like the wild, exotic animal you are."

Throughout the course of this episode, we learn that Ike is representing the house as his own at these parties, even going so far as to put the name of his alter ego, Issac Stevens, on the mailbox. The audacity! He's also generously chartered a bus for his partygoers to shuttle them to party nirvana.

At the first party, Ike shows up looking like a dime-store Steve Irwin, while his wife, Bonnie, is absolutely on point in a curve-hugging leopard-print dress with a giant plastic boa constrictor draped casually around her neck. Ike snipes at her about the twins being in two-piece swimsuits and then subtly negs her perfect outfit. But then we see him wearing the snake in the very next scene. Even though Ike's super-gross for stealing his wife's amazing accessory, it does seem fitting, because he is a poisonous, slithering snake.

The safari party goes pretty well. And when Marty and Ike return to the city, things go back to normal(ish). In a therapy session, Marty jovially shares how his body still aches from doing all the party chores. It's pretty clear that Marty is relieved that the event is over, and he'd be happy to never even hear the word party again in his life. But Ike has other plans. As Marty protests, Ike twists the narrative once more, saying that Marty needs to continue having parties to learn how to socialize. Ew.

Will Ferrell imbues Marty with an open innocence. He's being bullied by Ike every step of the way, and all of Ike's "treatments" are absolute nonsense, yet he somehow keeps believing that everything his psychiatrist is doing is for his own good. Here, Ike does make a half-hearted gesture of goodwill to Marty by offering him a koi and subtly suggesting that he build a pond on the Hamptons property.

A year later, Marty has built a splendid koi pond and he's tenderly caring for all his fishies. He does not care one bit about the themed fiesta that's about to take place on his property, but he gamely shows up to grill those famous kebabs of his.

At the party, Marty runs into Miriam (Sarayu Blue). She might look familiar, and that's because we've seen her twice already. She was at the shiva for Ike's father, but we originally met her back in episode two when Ike finished up his session with her as she walked out into the waiting room. Marty overheard a sensitive bit of info back then and, to Miriam's horror, he repeats it here. "Did you tell your mother 'no' about Florida?" he asks. She doesn't answer the question, but she acknowledges that many of Ike's patients are at the party. Yikes.

Marty also runs into a guest and inadvertently tells her that the house is actually his. It's unclear if this information makes it back to Ike because Bonnie snitched on him or if the guest did, but Ike finds out. And he gets BIG MAD. Ike confronts Marty about this at their next session. He claims that he's only protecting Marty (What?! How?!), and Marty just nods in agreement.

Skip ahead to 1997. It's a pirate party, and Ike rocks an outfit complete with a real parrot. Bonnie is sad. Marty is confused. No one is happy, except for Ike. And, presumably, this remains the status quo for the next decade, because the next time we check in with the gang, it's 2007.

There's a lot going on in 2007. It's a white party, so the yard is a sea of linen and lace. Ike looks like he's cosplaying as a cult leader. Marty and Ike both have salt-and-pepper streaks in their hair, and the guests are requesting things like blankets and hot tea instead of tequila shots and pool towels. Everyone's getting older, but Ike's party stays the same age.

But the real focus here is on our old friend Miriam.

Marty is more at home talking to his pets than engaging with the strangers at the party. (Honestly, same.) Ike finds him, and for some reason makes him chug two beers and then goads him into dunking Miriam in the pool. Marty does, and everyone at the party gets incredibly upset; Miriam is inconsolable. It's all very casually cruel, and the setup doesn't seem to have much going for it other than to shift Marty and Miriam to a quiet space by themselves.

As Marty guides Miriam to the guesthouse to grab some dry clothing, Miriam explodes. Blue's performance as Miriam is gutting. Her entire body seethes as words pour out of her in a waterfall of rage and regret. Ike told her to cut off her mother. Then her mother died. And she never had a chance to say goodbye.

This is a moment of catharsis that we've all been waiting to see from Marty. Miriam's story lays bare the utter destruction and chaos that Ike's sinister manipulation has wrought for hundreds if not thousands of individuals over the past two decades.

The interaction with Miriam rattles Marty. His cognitive dissonance cranks up another notch when he sees an old neighbor at the market, and she starts talking about Phyllis and the family. Marty contemplates not returning to the party, recklessly driving all over the country roads, but eventually he returns to the house. As he enters the kitchen and sees a vision of his mother, his face has lost all of that agreeable innocence from earlier in the episode; now his expression is blank, lost, and haggard.

So when Marty plonks down in his fish pond, Ike notices. He climbs in too, and he extends a very small kindness by asking about the names of the fish. (It's been 10 whole years and he hasn't asked?!) He calms Marty down enough to ask a huge favor.

That favor? Break up with Miriam.

On the trip back to the city, Foreigner's great power ballad "I Want to Know What Love Is" plays overhead when the bus comes to a grinding halt. Marty asks Miriam to walk with him to go get help. As they disembark, they stand out as two lonely green figures, adrift in a sea of white. It's a striking visual.

Ike has so irrevocably harmed these two people, and he's about to do even more damage here. Marty proceeds to strand Miriam at the gas station. The pay phone rings. It's Ike telling Miriam that she's a toxic person and that he doesn't want to work with her anymore. Miriam is free, but at what cost? And will Marty ever get his chance?

* Ike check-in: Ike's behavior profile is pretty much playing on repeat at this point. He's nasty and manipulative whenever he doesn't get what he wants, yadda yadda yadda. Given his never-ending quest for notoriety and proximity to celebrity, it's no surprise that he tells all his patients when he has a celebrity client. Miriam specifically mentions Gwyneth Paltrow. And in fact, The Shrink Next Door podcast confirmed that Paltrow was a patient of Ike's for a brief period, but then she terminated the relationship, as it "wasn't a good fit."

* Marty check-in: As the series often showcases the Jewish faith, Miriam's role here seems quite intentional. In the Bible, Miriam was Moses's sister, and she is the first prophetess in the text. Here, Miriam is poised to be Marty's savior, but by the end of the day, he's not ready to hear what she has to say.

* Ike and Marty check-in: While the show might feel like it is stepping into repetitive territory with this duo -- Ike is constantly pushing and Marty is always giving in -- this is actually what happened. It's also what happens in abusive relationships. There's even a term for it: the cycle of abuse.

* At the very first party, Marty really wants to put out some dip. This makes me think that he'd probably be good friends with the dip-loving Oliver from Only Murders in the Building. Now I'm imagining a universe where Marty lives in the Arconia and solves crimes with Selena Gomez. It's the least he deserves.