'The Matrix' Characters Sorted Into Their Hogwarts Houses 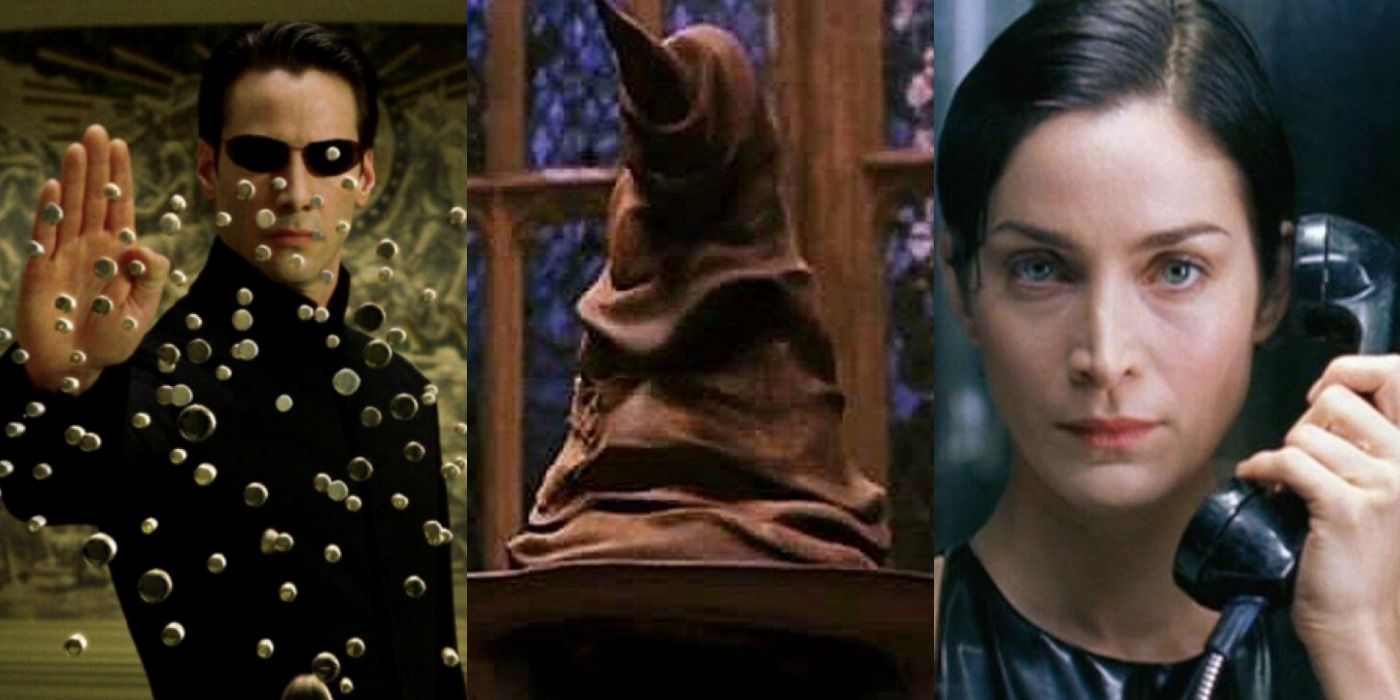 The final blockbuster release of 2021, The Matrix Resurrections divided critics and audiences. Though the action was surprisingly anticlimactic and overly digitized -- a far cry from the bar-setting action sequences of original sci-fi classic The Matrix -- it's easy to admire writer/director Lana Wachowski's smart, deconstructionist, and satirical script that's a breath of fresh air compared to more routine reboots and requels of late.

Like the heroes of the Matrix films, the heroes of Harry Potter and the Wizarding World come from humble, scrappy beginnings, assembling to fight a powerful and mysterious foe. The Matrix films are of course most well-known for their groundbreaking action and visual effects, but the characters have always been indelible, too, thanks to strong writing and performances. Neo and the human resistance, much like Harry and his Hogwarts colleagues, show courage and selflessness to overcome an evil whose influence runs deep. Where would the Sorting Hat direct the heroes and villains of The Matrix if they accepted an invitation to Hogwarts?

Like the Boy Who Lived, Thomas Anderson is an unlikely hero, and his journey goes full circle in the original trilogy: Neo begins as one of the plugged-in sheeple before Morpheus gives him the opportunity to take the red pill and free his mind. After seeing how deep the rabbit hole really goes, Neo ascends to hero status, and religious comparisons apply. In the original trilogy, Neo sacrifices himself for the greater good -- a noble deed that would be very much in character for a Gryffindor. Keanu Reeves certainly exudes the humility, strength, and curiosity of a Gryffindor, in one of his best roles.

Wachowski's Resurrections script imagines a wrinkle that gives Neo a second chance at freedom and a love life. He courts Trinity ("Tiffany" here) with a Gryffindor's honor, graciousness, and chivalry. For diehard fans of the original trilogy, the characters, and the actors, this noble and triumphant courtship, that ends with Neo and friends freeing Trinity from The Matrix, felt more like wish-fulfillment than fan service, which is a good thing.

The Matrix's leather-sporting enigma remains one of the coolest action heroines ever, thanks to a great Carrie-Anne Moss performance: a chilly composure on the surface, heart and warmth underneath. In addition to her signature fly-kicks and weapons mastery, Trinity exudes a Hufflepuff's smarts and grit. She's vulnerable enough to fall in love with the One, and also tough enough to put him in his place whenever he tries to keep her safe from the threat of the machines.

Trinity radiates Hufflepuff loyalty, and she goes to great, sometimes perilous lengths to defend her friends. What a pleasure it was to have Moss return in Resurrections, with Wachowski's script giving the actor an opportunity to play "Tiffany," Trinity rediscovering herself.

Wise and idealistic Morpheus is a father figure to Neo and Trinity; they both credit him with setting them free of the artificial reality of the machines, giving them a fighting chance. Always perching himself upon boundless knowledge, perhaps logical to a fault, but always well-meaning, Morpheus is a man of conviction. As Neo is willing to die for what he feels is right in his heart, Morpheus often puts himself in the line of fire to defend what he believes in, in his mind. A Ravenclaw leans on intellect and smarts. Part of what has always made the Matrix films so tantalizing from the jump is the philosophy, the questions of fate versus choice that the series raises but wisely never answers. Morpheus, who lays out the human resistance's groundwork and planning as any good Ravenclaw would, is an essential part of that.

Laurence Fishburne's stentorian, bright performance guided Neo and the audience through the exposition-heavy first half of The Matrix so well it was never less than exciting. He's missed in Resurrections, though Candyman's Yahya Abdul Mateen II steps into the role with a playful reimagining that matches the new film's lighter touch.

The Matrix's theatrical Villian soars thanks to a sneering performance that made Hugo Weaving an international star. The manipulative, scheming program is obviously a Slytherin; his ambition appearing endless as he replicates to seemingly infinite lengths. Agent Smith and Voldemort certainly have a lot in common, from their temptation and manipulation of the weak-minded to their sick obsession with each series' respective Chosen One.

Scenery-chewing Jonathan Groff is a highlight of Resurrections, as this generation's new Smith. Hugo Weaving almost came back to The Matrix franchise, but Groff's performance stands on its own. His new program is a little more camp, like the film itself. The light, sometimes satirical touch is a strength of Resurrections. It stands out among other legacy sequels that seem content to just copy and paste.

Though she approaches everything from more of a position of neutrality, The Oracle, like Morpheus, rests on mountains of knowledge that would very much qualify her for Ravenclaw. Unlike Morpheus, she's the messenger, not the leader. She's always one step ahead of her subjects and not above playing some mind games -- not sinister or sick ones -- more like exercises that strengthen the intellects of our heroes.

The Oracle means well in her assistance and guidance to Neo and friends, but she never coddles or oversteps in her position of informed authority. She sees the bigger picture, as any good Ravenclaw One of the biggest losses of the original series was the death of Gloria Foster, who played the program with just the right amount of humanity.

Perhaps the best performance in the overall well-acted Resurrections is Neil Patrick Harris' delicious spin on Reloaded's architect, a more engaging and certainly funnier villain -- with purple spectacles and a cat. The Analyst reflects an evolving artificial intelligence power with a Slytherin's entitlement and ambition; he's the most fascinating new character.

There's no denying Resurrections is underwhelming in the action department, but at least some of what it lacks in kinetic energy it makes up for with Wachowski's edgy script and acerbic, meta dialogue that is fearless in its willingness to dissect everything from movies to tech to the way people live their lives. Harris' performance does much of the heavy lifting here, as the Analyst self-serves and plots like a true Slytherin at heart while expressing a lot of Resurrections' boldest ideas to the heroes and the audience.

KEEP READING: Here's How To Watch the 'Matrix' Movies In Order

Here's your go-to guide for jumping into the Korean drama craze.