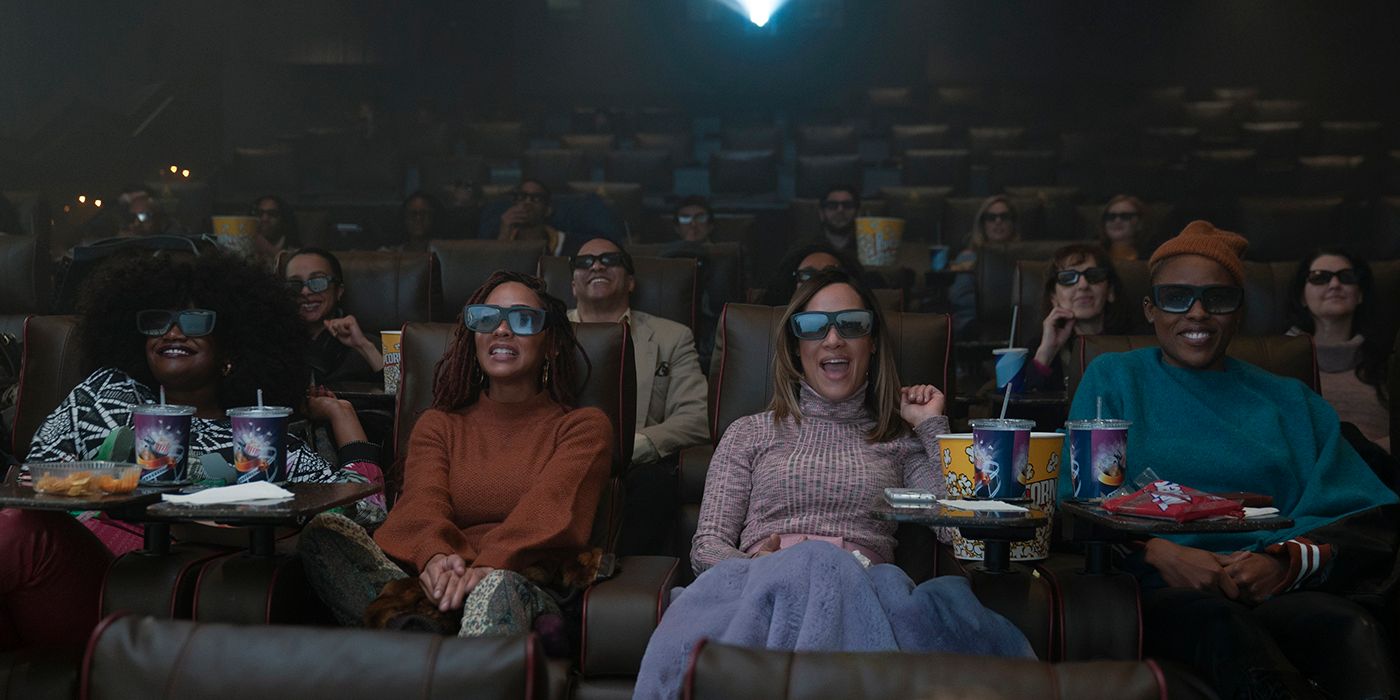 Harlem, the latest offering from Tracy Oliver (who wrote Girls Trip and Little) and Britt Matt (who collaborated with Oliver on the recent First Wives Club reboot), is a fresh take on female friendship that just dropped its complete first season on Prime Video. The series follows four ambitious women living in New York City, and each episode explores how they handle not only their friendships but also romances and career moves - new, old, wise, and otherwise.

Quinn (played by Empire's Grace Byers) and Angie (portrayed by I Am The Night's Shoniqua Shandai) make up two members of the fabulous foursome. The roommates could not live more different lives, with Quinn coming from money and running her own fashion design business while Angie works several jobs in pursuit of her dream to sing and perform on stage. But through thick and thin, the friendship between all four remains at the heart of the story.

Byers and Shandai spoke to Screen Rant about the rock solid friendship the women share and the troubles that creep into their lives during the show's first season.

Screen Rant: I feel like Angie and Quinn are the opposites-attract kind of friends. Can you talk about the secret to balancing that dynamic?

Grace Byers: Yes, I totally think that it is very much a symbiotic relationship. I think that it's also making room for each other to be as we are, and then not feeling like we need to either shirk back from who we are or dim the other person down a bit. I feel like just living in that space so freely and openly, and embracing each other with such love, gives space for that.

And I think that there's also room to value the things in each other that we may be hesitant or reticent to employ in our own lives as well. There's much that Quinn admires about Angie, and I would dare say that there's much that Angie admires about Quinn. I feel like just being able to embrace those parts of each other in that space is really what makes a friendship work.

Even as I was reading the script, I was thinking, "They couldn't be more different! How does this work?" But being in that space with Shoniqua - and I think this is what's so wonderful as well - in what Shoniqua brings to Angie, and what I really attempt to bring to Quinn, I really feel [adds] such a love and such a trust there. Between the actors and between the characters, their relationship, and friendship, I think that really makes room for a symbiotic connection.

I love how positive and beautiful that is. Shoniqua, do you want to discuss the downsides or the frustrations Angie has at the start of this season?

Shoniqua Shandai: Oh, yes. I think it's feeling not quite understood in her artistry by her friends. She's not the only artist, because Quinn is a fashion designer, but she's the only one where it almost feels like you have to rely on other people for an opportunity. Like a singer, you can't sing unless somebody allows you to come into their space and sing.

She's not quite feeling like her friends are relating to her; not quite feeling like they're seeing her fully. There's a moment where baby girl is working multiple jobs, and her friends are still pooh-poohing on her - and they don't even realize. It's like, "Listen, I am at this point. I am out here, almost working as something that I feel is so beneath me, and just wanting to be seen." She's wanting to be supported, and really needing the encouragement from her friends in that moment when she's feeling so incredibly vulnerable.

But I think because she's such a vivacious human being because she's always the truth-teller, they don't see it for a second. It comes in later, but that's usually how it is. The people who are usually the loudest or the most strong, forthcoming, and upfront - we miss the moments where they're being vulnerable. We miss the moments where there's a yearning there because, in the exterior, we're just used to them having the confidence that they need, regardless of whether you're there to enforce it or empower [them] or not.

If you could give your characters one piece of advice going into this season to make their lives easier, what would it be?

Grace Byers: For Quinn, I think it would be, "Trust yourself". Trust yourself, release the expectations that other people have of you, and fulfill the dreams of your own heart.

Shoniqua Shandai: For Angie, it would be to not allow past disappointments to affect the way you feel about your future, or to determine the margin in which you allow yourself to dream, romantically or career-wise.

All 10 episodes of Harlem are currently available to watch on Amazon Video.

Tatiana Hullender is a writer at Screen Rant, focusing on film and television, as well as a co-host of several podcasts. In the interviews she conducts for Screen Rant, she seeks to learn what drives each creative mind and how different experiences influence the same narrative. As a graduate of Columbia University in New York City, Tatiana studied theater and comparative literature. She has been passionate about all manner of storytelling since being exposed to Jane Austen and BBC adaptations of her work all at once. But Regency satire of manners isn't the only genre she loves, as a love of comic books naturally developed into a love of cinematic universes and their superheroes. So long as a story has heart and humor, there's a chance of finding something to enjoy in the telling of it. Visit @myrcellasear on Twitter to follow Tatiana's articles, interviews and podcasts including: The Flash Podcast, Pop A La Carte and Ladies With Gumption. Subscribe to them on the Podcast app, or contact her directly at painted(dot)out(at)gmail.com.