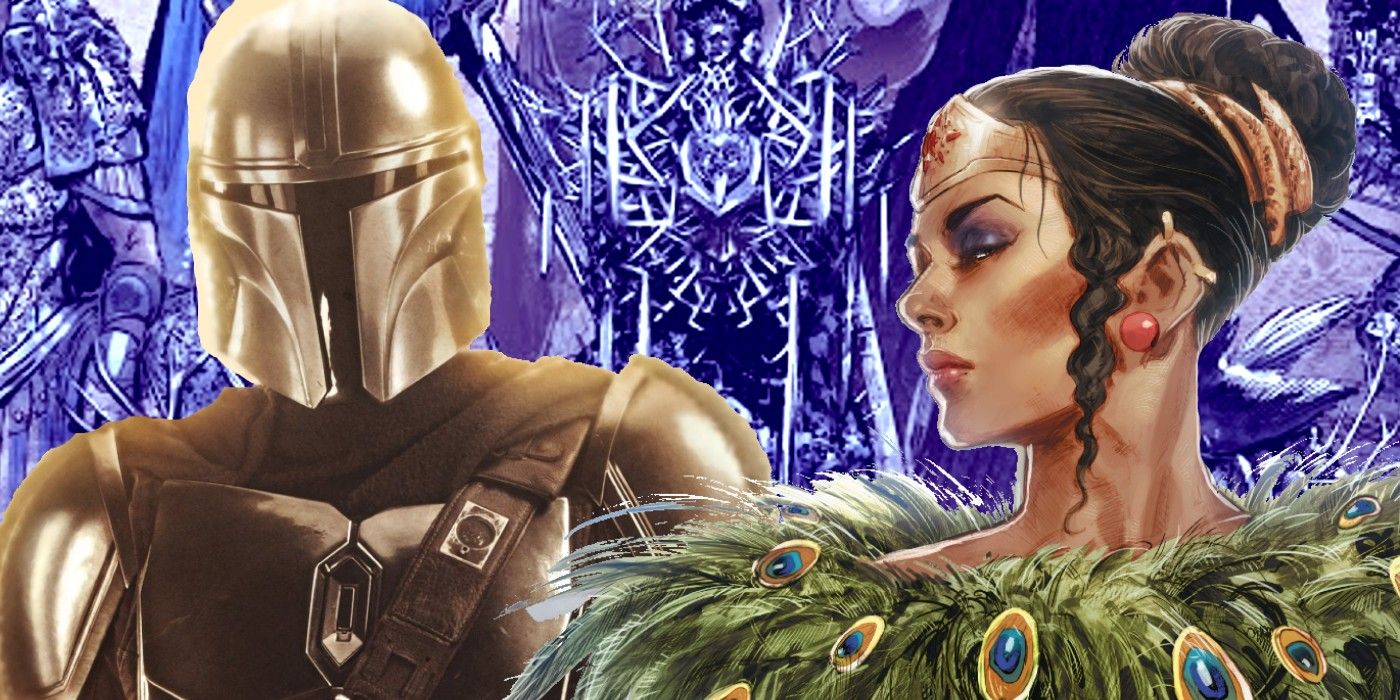 When it comes to protecting identity, Star Wars' Mandalorian rules seem extreme, but DC's Amazons are going one step further. In Wonder Woman: Historia #1, masks ARE identities, not simply means of protection or cultural traditions. Amazon headwear has never looked quite like this before.

The latest Black Label title from DC rewrites the history of the Amazons. Wonder Woman's sisters and mother are very well known - or so fans would think. Everything fans know about the Amazons is changing within this history. This includes their warrior ways, which are seemingly becoming more and more like Star Wars' Mandalorians. The Amazons have a new way and they're prepared to follow it thanks to the gifts of their goddess mothers.

Wonder Woman: Historia #1 has the creative team of Phil Jimenez, Hi-Fi, Arif Prianto, Romulo Fajardo Jr., and Clayton Cowles. Within the issue, six tribes of Amazons are formed under six goddesses. Hecate's tribe has a special design - one that takes Mandalorian identity hiding to a whole new level. A design note at the end of the issue reveals that the masks they wear are actually more than just facial coverings.

Hecate is often depicted as the goddess of magic and witchcraft, though she is also associated with dogs, boundaries, and pathways - often being seen bearing torches. She can also be depicted as having three connected bodies. In this new series, she is one of the six goddess mothers of the Amazons. The Hecate Tribe implements a visual component of hers and extrapolates it. Hecate has been pictured with a crown of entwined branches. Her Amazon tribe similarly has antlers and entwined headwear. However, they also wear masks, which, "like all members of Hecate's tribe,...is her face and cannot be removed. Eyes cannot be seen."

The golden mask is worn by the five Amazons who make up Hecate's tribe. These include Alkyone, Mnemosyne, Euboea, Philomela, and the tribe's queen, Menalippe. This is a new twist on Amazon gear, which is typically very classical in nature, composed of visually stereotypical Greek-influenced shields, helmets, and weapons. There is nothing stereotypical about these Amazons. Hecate's tribe wears metal spikes and bear symbols of Hecate, including crescent moons, motifs involving triples, dogs, and even Empousai.

Mandalorians in Star Wars are known for their strict warrior ways. Some groups of Mandalorians adhere to the rule that demands they never remove their helmet in front of another person. Others are less strict about this action, including Bo Katan, but nonetheless, it has become a core component of some Mandalorians' culture. The masks worn by Hecate's tribe ARE their faces and there doesn't appear to be a way to remove them in any typical fashion. Instead, these masks have become their identities. In the past, each Amazon has had their own past and identity that appears very human. This history of the Amazons completely changes the approach of what an Amazon should be and look like. They are still warriors, but they now appear stricter in their ways and even somewhat less human in the case of Hecate's tribe. Star Wars' Mandalorians may not want to reveal their identities, but DC's Amazons are masters of mask-wearing thanks to the newest Black Label series.

Samantha King is a Comic News Writer for Screen Rant. She has a B.A. in English & American Literature with a concentration in Shakespeare and a minor in Creative Writing from UTEP. She also has a M.S. in Library Science from the University of North Texas. Samantha used to get in trouble for reading comics in class back in high school, but she gets the last laugh. She took a graphic novel course in college and now gets paid to write about comics. She runs her own blog at: www.therealworldaccordingtosam.blogspot.com